Why I Farm – Durham Farm in Carroll County, Missouri

Home / In the News / Why I Farm – Durham Farm in Carroll County, Missouri

Why I Farm – Durham Farm in Carroll County, Missouri 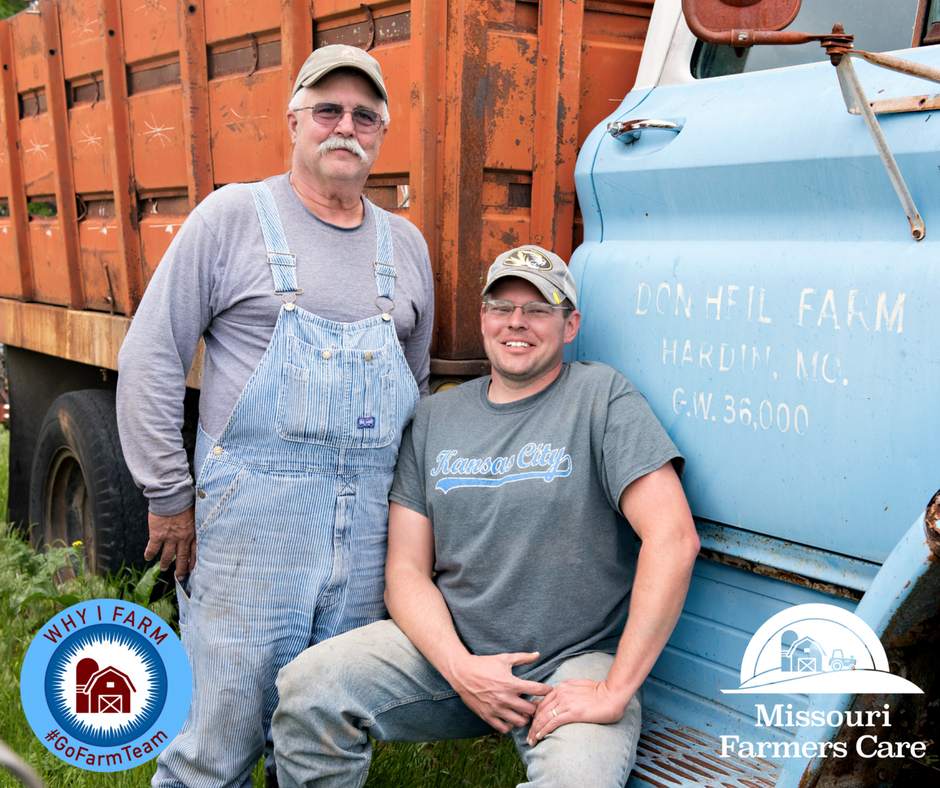 Their noble lineage began with David’s father-in-law, the late Don Heil, who was the inaugural “King Soybean” at the Norborne Soybean Festival he helped organize in 1982. The title was earned, not bestowed. Don worked tirelessly throughout his life to promote agriculture, specifically the soybean industry. He was a founding member of the Missouri Soybean Association in 1966 and played an integral role in establishing both the state and national soybean checkoffs. He served on the American Soybean Association, United Soybean Board and Missouri Soybean Merchandising Council during their formative years.

“I tell people I’m third-generation lots of things,” Kyle says. “Carroll County farmer, director for the Missouri Soybean Merchandising Council, county Farm Bureau president and yes, King Soybean. Dad got crowned three or four years after Grandpa, and then me. That was another one of Grandpa’s things here locally. He even worked to get Norborne known as the ‘Soybean Capital of the World.’”

David began farming with his father-in-law in 1974 after graduating from the University of Missouri with an animal sciences degree and marrying Don’s middle daughter, Karen, also a Mizzou grad.

“I couldn’t have found a better spot to farm or a better family to do it with,” David says. “Don and I farmed together for more than 20 years — up until ’95 when he passed away. Well, I farmed. He went to meetings, and I was happy with that!”

Kyle, 38, followed in his parents’ footsteps at Mizzou but originally had no intentions of returning to the farm full time. He was working at a Kansas City public relations firm in September 2003 when he came home to help his dad with harvest. He never left.

Together, the father-son duo now farm some 2,500 acres of soybeans and corn in the Missouri River bottoms of Carroll and Ray counties.

“Agriculture — every part of it — has gotten bigger,” David says. “Don was always progressive in expanding acreage to make it economically viable for his family. A single guy operating on the farm today can’t physically work hard enough to manage the acres it takes to support a family. You need a two-person type of operation.”

To keep their operation efficient and profitable, technology has a prominent place on what David and Kyle still refer to as the Don Heil farm. Most of their acreage is grid-sampled and fertilized with variable-rate applications, and this spring, they planted with precision seeding rates based on soil type and historical yield data.

“When you’re farming more and more acres and that planting window gets compressed, any advantage you can get makes a whale of a difference,” Kyle says.

The Durhams believe their farm’s founder would have embraced these technological advances. A farming pioneer himself, Don was an early adopter of land grading to improve surface drainage and water management of northern Missouri farmland.

“I think he would’ve loved all this,” Kyle says. “He was a gadget guy and really enjoyed technology and learning new skills and techniques. I don’t know how many thousands of acres they put to grade in the 1960s when it was largely unheard of. He enjoyed taking on any challenge you could throw at him.”

While improving their farm through technology honors Don’s legacy, so does the Durhams’ commitment to service in soybean industry. Like his father-in-law, David served on the Missouri Soybean Association and Missouri Soybean Merchandising Council as well as the United Soybean Board.

“If you’re going to push innovation to make farming better — not only in soybeans but other crops as well — you need to get involved in it,” David says. “I’ve always believed in checkoffs. They have the ability to change things.”

Kyle is currently MSMC’s District 2 director and serves on the research committee. He says his father and grandfather inspired him to also take an active role in the industry.

“My family has obviously made a living in agriculture over the years, so I think it’s important to give back,” Kyle says. “You can’t expect someone else to do it. I’m giving back by helping to oversee how my checkoff dollars and the dollars of the Missouri soybean farmer are being spent and ensure a tangible return to growers.”

The Durhams also have been instrumental in building the biofuel industry in Missouri. David helped establish Show-Me Ethanol, a dry-mill production facility in Carrollton, and has served as chairman of the board for the past 12 years. He is also among a group of farmers who helped launch biodiesel production facilities in Kansas City and Mexico.

“We had two main goals: make biodiesel and get part of that return to investors, and keep the soybean-crushing industry in Missouri,” David says. “I think we accomplished both goals. I don’t think that industry is leaving our state now.”

The Durhams also advocate for agriculture to the nonfarming public, hosting farm tours and serving on producer panels at conferences. Kyle was in the 2015 class of Agricultural Leaders of Tomorrow (ALOT), which his grandfather co-founded in 1983 and served on its advisory board. The intensive, two-year leadership training program includes 10 in-state sessions, a week-long seminar in Washington, D.C., and a two-week international experience to a country that impacts Missouri agriculture.

“Lots of folks don’t think they have time for it, but you need to make time for it,” Kyle says. “Just as we think of people who don’t have an ag connection, we don’t always know what goes on with the other side either. We can’t expect someone to walk in our shoes if we’re not willing to walk in theirs.”

Twelve years after Don’s death, his agricultural accomplishments still are being recognized. On April 5, the Missouri Soybean Hall of Fame inducted him as its first member, a crowning jewel in a remarkable career that continues today with David and Kyle.

“The family is proud that Don was recognized in the Hall of Fame,” David says. “He was a goer and a doer, not only in soybeans but agriculture in general, from local to state to national and international levels. He was always willing to step up and do his part.”

Kyle and his wife, Courtney, have two sons, Simeon, 9, and Elijah, 5, so there’s hope that the family’s agricultural aristocracy will continue. But Kyle says even if the boys choose other careers, their farming heritage will serve them well.

“Right now, they both want to be astronauts, but we try to get them out on the farm as much as possible,” Kyle says. “It’s our family and our heritage, and even if they don’t come back and farm, we want them to have an understanding of what’s going on. If I can send some knowledge of agriculture with them, then that’s a good thing.”

Head over to MOSoy.org to find out more!