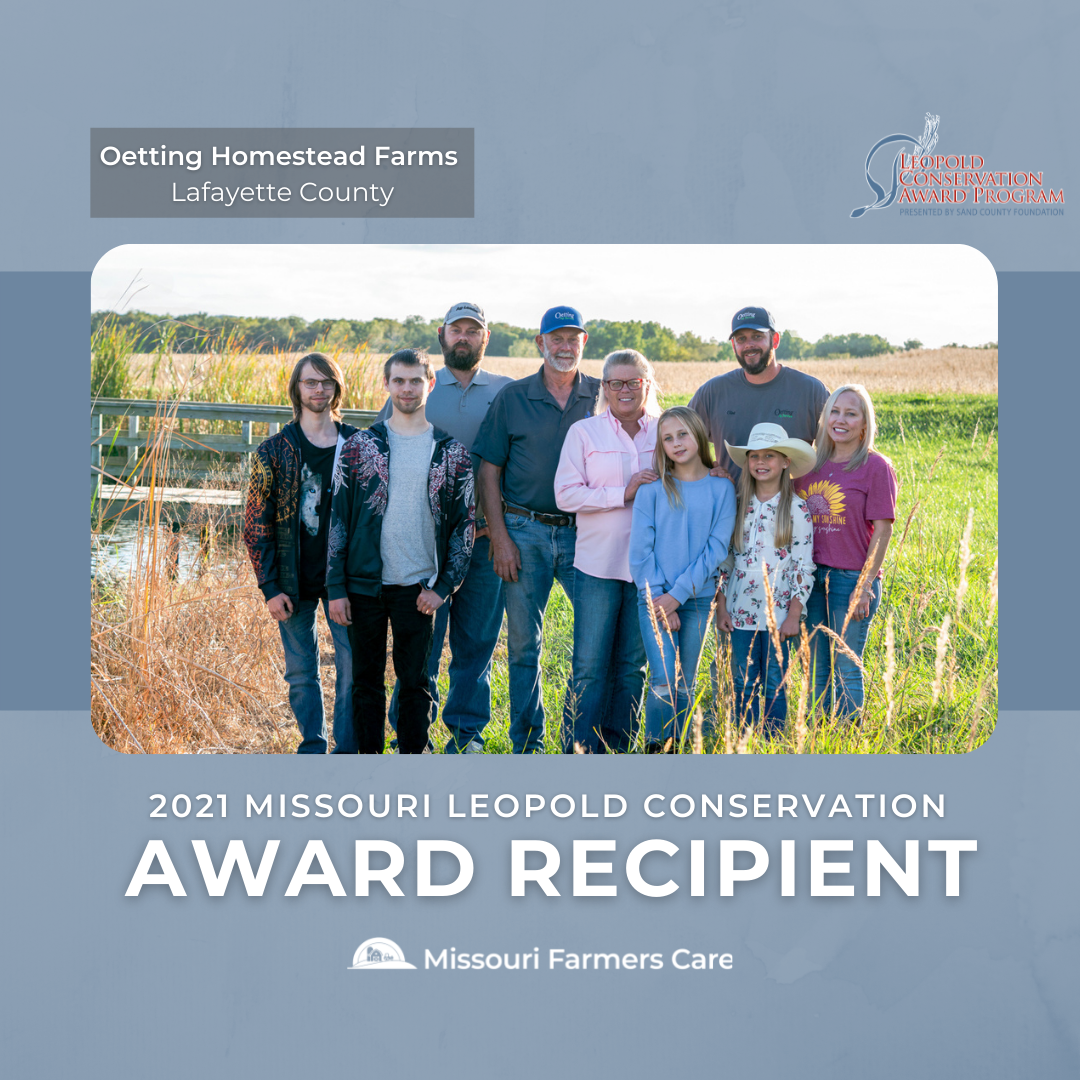 Oetting Homestead Farms of Concordia, Missouri, located in Lafayette County, has been selected as the recipient of the 2021 Missouri Leopold Conservation Award®. This award, named after renowned conservationist Aldo Leopold, recognizes farmers, ranchers and foresters who inspire others with their dedication to land, water and wildlife habitat management on private land.

Steve and Sharon Oetting’s farm was announced as the award recipient during the Missouri Governor’s Conference on Agriculture in Osage Beach on November 18. For their recognition, the Oettings received a check for $10,000 and a crystal award.

“The Oetting family have demonstrated the long-term commitment necessary to constantly build and protect their land, allowing this 5th and 6th generation farm family to continue to make a living producing food for America,” said Scott Edwards, NRCS Missouri State Conservationist. “Being intentional in implementing conservation practices and investing in the future, make this farm an excellent example of the many good things happening in Missouri agriculture.”

Steve and Sharon have continually demonstrated the compatibility of conservation and commerce on their family’s century farm. With their sons Sean and Clint and their families, the Oettings grow corn, soybeans, wheat, and custom finish 3,000 hogs annually. Their efforts to reduce soil erosion, enhance wildlife habitat and protect water and air quality led to Oetting Homestead Farms being certified as one of the first farms in the Missouri Department of Agriculture’s Agricultural Stewardship Assurance Program.

“In agriculture, our greatest resource is the land, and as farmers, it is our duty to be good stewards of that land for future generations,” said Kyle Durham, chairman of the Missouri Soybean Merchandising Council. “Sustainability is one of the top priorities for the Missouri Soybean Merchandising Council, and it’s outstanding to see the spotlight on the Oetting family’s example of stewardship.”

In the 1970s, the Oettings transitioned from dairy to pork production. To store swine manure, they constructed a three-lagoon system with an adjoining 2.8-acre lake, which eliminated the need to purchase 1.3 million gallons of fresh water annually. The lake is used for watering livestock and other farm uses, including washing barns. Effluent treated in the lagoons is recycled to provide nutrients for crops at a much lower cost than commercial fertilizer.

To prevent erosion, rotational cropping of no-till corn and soybeans is used on all available cropland. Underground tile outlets and terraces are installed and maintained. In consultation with a certified crop advisor, the family utilizes soil sampling and variable rate fertilizing and seeding practices. The use of precision agriculture enables the Oettings to apply crop nutrients such as nitrogen, phosphorus, and potassium in precise amounts to limit risk of runoff and increase yield potential while cutting input costs.

“As the national sponsor for Sand County Foundation’s Leopold Conservation Award, American Farmland Trust celebrates the hard work and dedication of the Missouri award recipient,” said John Piotti, AFT President and Chief Executive Officer. “At AFT, we believe that conservation in agriculture requires a focus on the land, the practices and the people and this award recognizes the integral role of all three.”

Earlier this year, Missouri landowners were encouraged to apply, or be nominated, for the award. Applications were reviewed by an independent panel of agricultural and conservation leaders. Among the many outstanding Missouri farmers nominated for the award were finalists: Britt Farms of Clifton Hill in Randolph County, and Cope Grass Farms of Truxton in Lincoln County.

In his influential 1949 book, A Sand County Almanac, Leopold called for an ethical relationship between people and the land they own and manage, which he called “an evolutionary possibility and an ecological necessity.” Sand County Foundation presents the Leopold Conservation Award to private landowners in 23 states with a variety of conservation, agricultural and forestry organizations. For more information on the award, visit www.leopoldconservationaward.org. 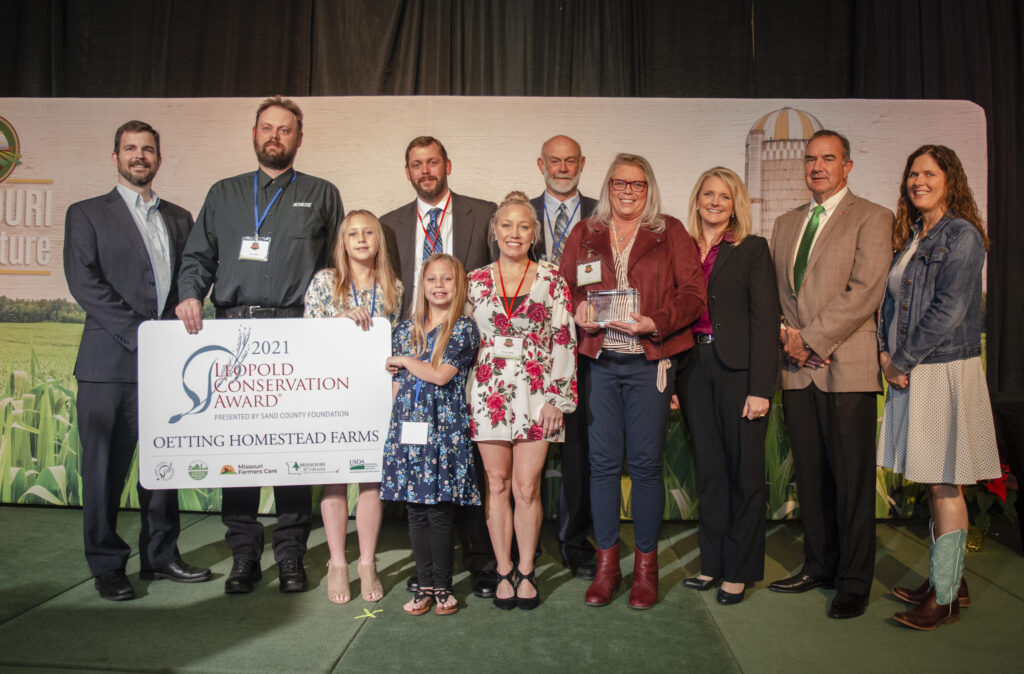 AMERICAN FARMLAND TRUST
American Farmland Trust is the only national organization that takes a holistic approach to agriculture, focusing on the land itself, the agricultural practices used on that land, and the farmers and ranchers who do the work. AFT launched the conservation agriculture movement and continues to raise public awareness through its No Farms, No Food message. Since its founding in 1980, AFT has helped permanently protect over 6.5 million acres of agricultural lands, advanced environmentally sound farming practices on millions of additional acres, and supported thousands of farm families. www.farmland.org

MISSOURI FARMERS CARE FOUNDATION
Missouri Farmers Care Foundation enables Missourians to understand the influence and importance of agriculture in their daily lives by serving as the centralized hub of the unified educational programs, awards, and hunger relief efforts of Missouri’s agricultural community. www.MOFarmersCare.com