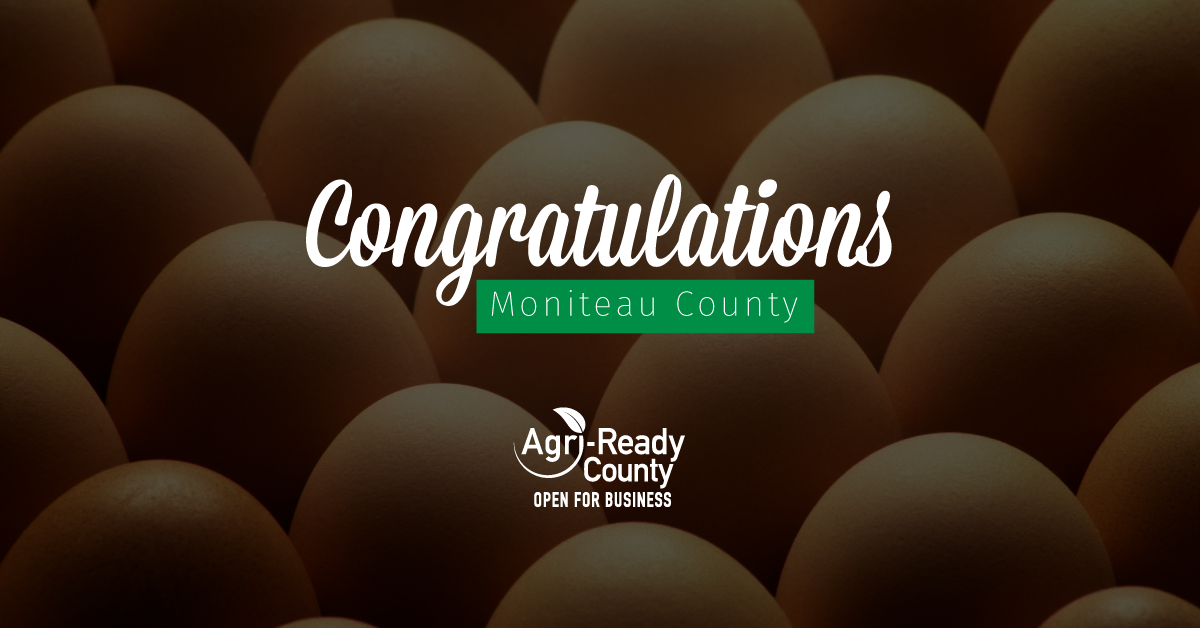 Moniteau County’s 1,089 farmers and ranchers sold over $173 million in agricultural products in 2012, according to the United States Department of Agriculture’s (USDA) most recent census. The county’s agricultural strength is anchored in the value of livestock and poultry with 91 percent of sales coming from livestock. In the 2012 USDA census, the county led the state in the value of sales of cattle and calves while ranking in the top ten for value of poultry and egg; nursery and greenhouse; and vegetable, melon and potato sales.

“We are pleased to announce Moniteau County has achieved Agri-Ready Designation; recognizing the county’s strong commitment to farmers and ranchers,” said Ashley McCarty, executive director of MFC. “Agriculture is such a strong economic component of many counties and Moniteau County is proof of that. Designation showcases the economic contribution of agriculture that creates jobs and helps maintain the roads, bridges and schools that add value to the economy and the quality of life in Moniteau County. We will work to highlight and build on the county’s agricultural strengths.”

Through the Agri-Ready program, MFC will partner with county leaders, farmers and agribusinesses to advance local agricultural enterprise, promote the county as a conducive location for business expansion and enhance workforce readiness for agricultural careers. MFC will recruit local 4-H and FFA leaders to implement Agriculture Education on the Move™ in third grade classrooms. These student leaders will present agricultural careers and crop and livestock production through engaging, hands-on activities and lessons while developing their speaking and leadership skills. In addition, the collaboration encourages participation in the Missouri Department of Agriculture’s voluntary Agricultural Stewardship Assurance Program, recognizing stewardship at the farm level.

MFC’s Agri-Ready County designation launched in December 2015 as a voluntary connection between Missouri counties and MFC. According to the USDA, Missouri agriculture added $5.2 billion in net value to the state’s economy in 2014, making agriculture the largest sector of the economy. The Agri-Ready County designation recognizes and builds on the impact of family farmers and agri-businesses as key contributors to our economy and our communities.

Missouri Farmers Care is a joint effort by Missouri’s farming and agriculture community to stand together for the men and women who provide the food and jobs on which our communities depend. For more information about Missouri Farmer Care and the Agri-Ready County Designation program visit www.mofarmerscare.com or contact Ashley McCarty, Executive Director of Missouri Farmers Care at 660-341-8955.