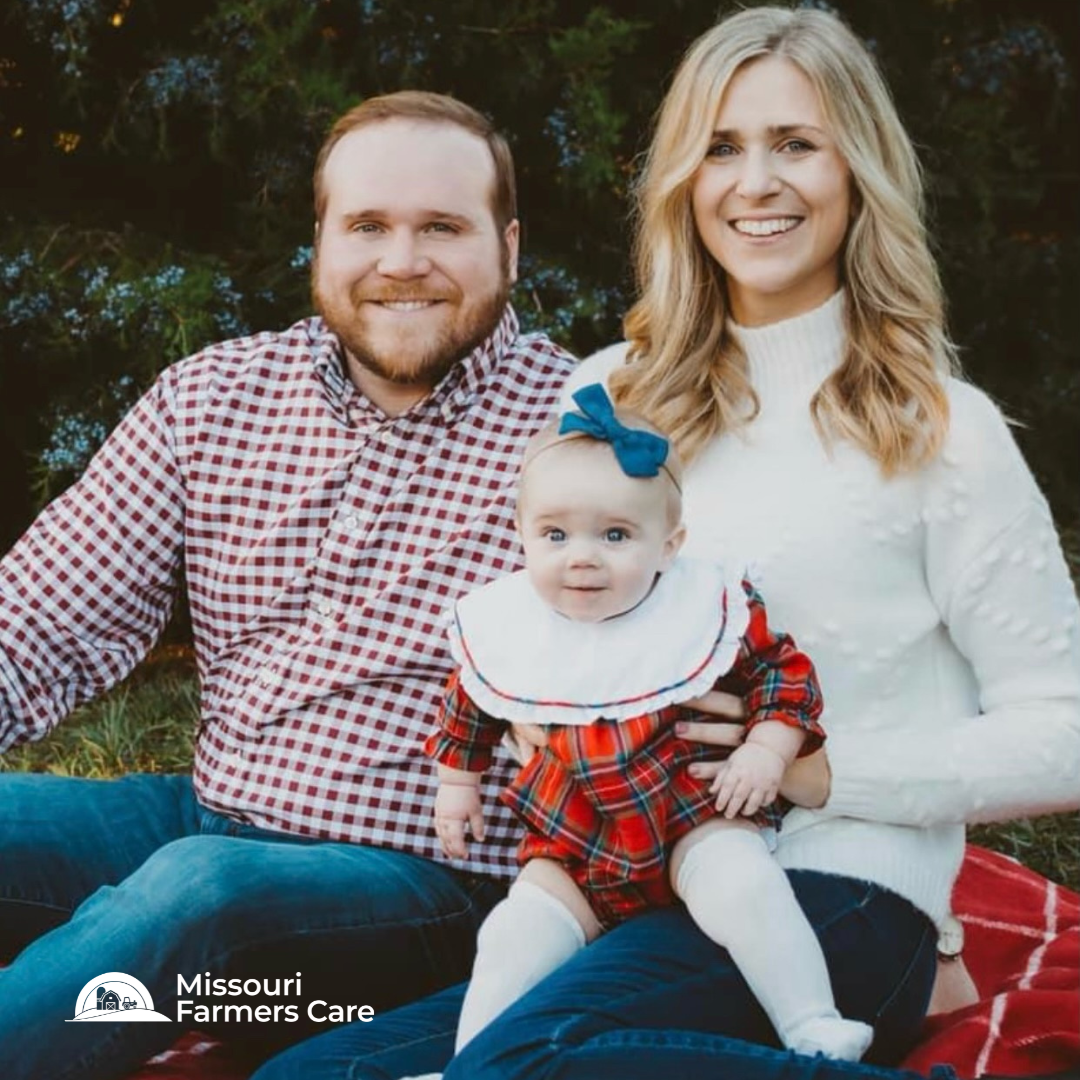 Trey and his wife, Ellie, and daughter, Poppy.

How Trey Graves is evolving a seven-generation family operation

A father in Congress and a family full of farmers has kept Trey Graves’s life interesting. Though the seventh-generation farmer always knew farming was his end goal, he still makes his life his own in #AgriReady Atchison County.

After graduating high school, the Tarkio, Missouri, native received his bachelor’s degree in agricultural systems management from the University of Missouri, better known as Mizzou. Life after college saw a short career stint for Trey out of the fields and into an office as a loan officer. Though his time as a loan officer was valuable, Trey said he quickly realized the office setting was not a natural fit.

“Getting out and working for someone else for a little while is important, I think. When it's someone else's rules and being held accountable by them,” Trey said. “But sitting in an office all day long, it just wasn't for me. I've been around farming my entire life. And I knew that that's what I always wanted to do eventually.”

The opportunity to farm full-time presented itself to Trey rather soon after moving back home to #AgriReady Atchison County. Trey has been farming ever since, growing his operation alongside the family’s.

Trey in his field.

Farming is a family affair for the Graves. Trey farms alongside his grandfather, father and uncle. Though each operation serves as their own entity, the family shares equipment, ideas, and comes together for harvest. Trey said keeping the family unit tied into farming is of great importance to him.

“If I'm going to be working closely with someone all day long, I would rather it be my family because we're really close,” Trey said. “Tempers can go wild and go haywire, but I think that that's natural, and that's really never been a problem for me. We all like working together. It definitely makes it interesting, but it's also very fun.”

Trey notes that there are some things he carried with him from the office to the field, such as a deeper understanding of the loan process and itemizing – though as an officer, Trey said he saw the issuing side rather than the application side. However, Trey strongly believes the greatest lessons he’s learned about farming come from the men he farms with.

“Having people that will mentor you to a degree I think is one of the most important things,” Trey stated. “Guys that are in the game that are successful already, like my family – my dad, my uncles, my grandpa – and having that as a guide and learning from them, I think has helped more than anything.”

Though farming is a common ground for the men in the Graves family, Trey’s father, too, paved his own path. Trey’s father, Sam, serves as the United States representative for Missouri's 6th congressional district. Congressman Sam Graves has been in politics Trey’s entire life, making it nothing out of the ordinary for Trey.

“He was elected to Congress in 2000, so that's kind of really always been my life, and I don't really know anything different,” Trey notes. “He was home every weekend and things like that, so it’s not like I was going months without seeing him. It really hasn’t been a big deal.”

If anything, Trey’s father being in Congress allowed him to gain some early traction farming. While many younger generations coming back to the farm may have to wait years to begin management or ownership of the family farm, Trey said he was given the opportunity to rent farms from the operation.

“I was able to start renting farms from my parents, and I was able to pick those up as rental properties and start farming them myself,” Trey said graciously. “Without him being in office, I wouldn't have gotten that kind of an opportunity – to start out and get as much traction as I did at the beginning. And I think that that helped me out tremendously.”

Trey’s traction has yet to slow down. He currently grows corn and soybeans, like the rest of the family, but he also manages some feeder steers. Though the family-orientated aspect of the farm is important to Trey, he is not afraid to go out on a limb by himself to try new things.

“I think it’s incredibly important to stay up-to-date on new innovations,” Trey said. “Just because people have been doing things a certain way for 50 years, that's not a reason to keep doing something. All this cutting-edge data that's out now shows maybe there's some things you can change up. Different things that maybe someone wasn't doing before, I'm willing to try it. And I've seen a lot of tremendous results, in terms of yield and things like that and kind of fine tuning that to my recipe. That is just so, so interesting to me.”

Trey doesn’t keep his findings to himself, though. Trey’s uncle, in part, heads up a larger portion of the operation, so when Trey makes new discoveries, he’s the man he tries to get on board, though it’s not always the easiest job.

“It takes a little bit more to get those guys around to it than it is for me,” Trey said. “I’m like, ‘Well, what do I have to lose? I'm going to try it.’ So, if I have to make myself the guinea pig to some degree for some things like that, I'm willing to do that. But you can't argue with good results, and if something doesn't work, we just don't try that anymore.”

Farming may take up a large portion of Trey’s time and availability, but his wife, Ellie, and baby, Poppy, are his pride and joy. Trey said being a father is one of the best parts of his life.

“It’s the absolute best. Ellie will bring her out to the to the field and she’ll ride around in the combine with me and on the planting tractor, and I absolutely love it,” Trey laughed. 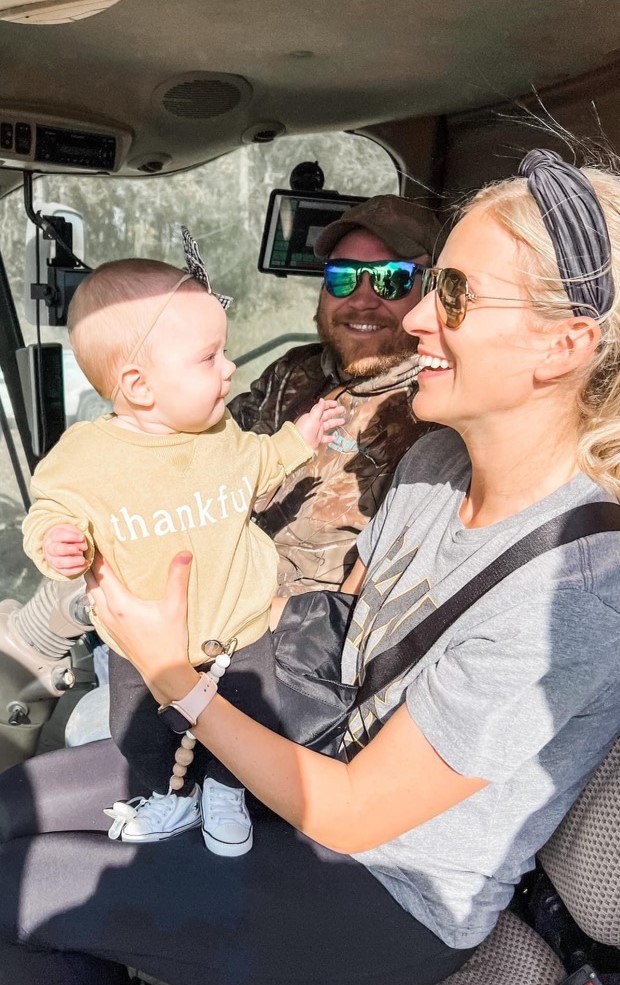 All smiles for the Graves family.

With farming and raising a family comes little time to engage in outside activities, but Trey still tries to find the time. Trey serves on the Atchison County Farm Bureau board, the steering committee at Tarkio Technology Institute, loves to travel, and his wife serves in P.E.O. Previously, Trey was also a part of the Agricultural Leadership of Tomorrow (ALOT) program, a two-year program that takes leaders through all facets of agriculture in Missouri.

Trey believes in the significance of community involvement, but in this time of building and growing, his focus stays on farming, something he remains passionate about.

“I like the freedom that comes with agriculture. Being your own boss and kind of relying on yourself to get the job done,” Trey said. “I just love being a good steward of the land, leaving some place in a better condition than when I got there, in terms of soil health and things like that. Raising the absolute best crop and the highest yielding crops that I can grow. Using data to try new things. I just love that so much.”