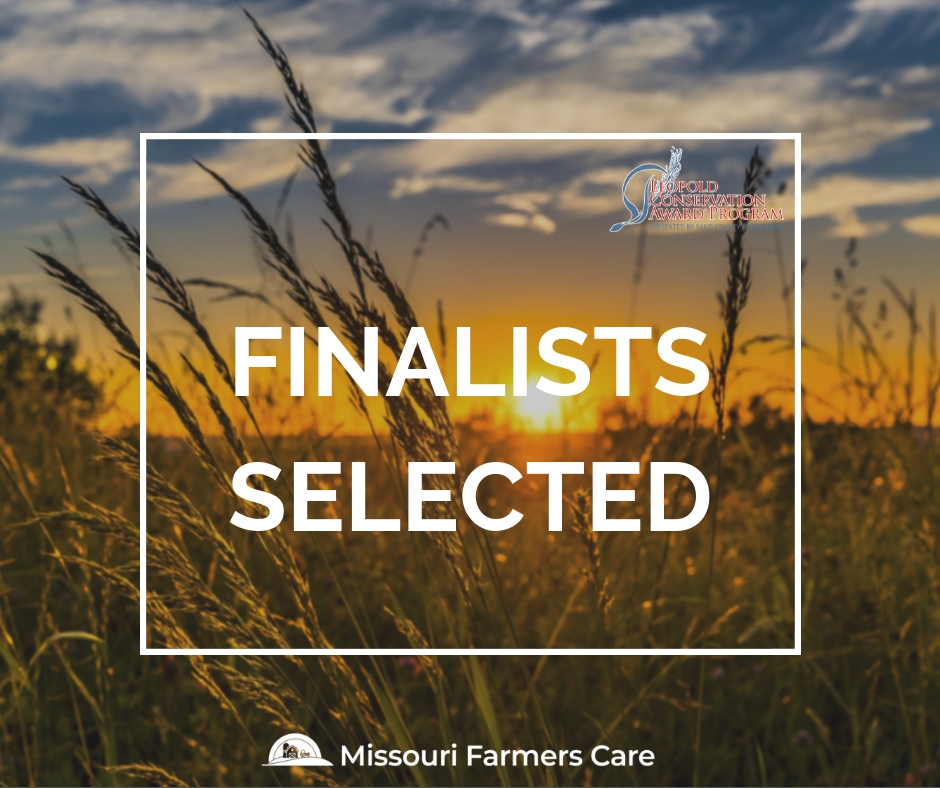 Given in honor of renowned conservationist Aldo Leopold, the award recognizes farmers, ranchers and foresters who inspire others with their dedication to land, water and wildlife habitat management on private, working land.

This year’s recipient will be announced in January 2019 at the Missouri Governor’s Conference on Agriculture.

“The Leopold Conservation Award recognizes the efforts of farmers and ranchers who continually strive to better the stewardship of their farms and ranches,” said Alan Wessler, D.V.M, chairman of Missouri Farmers Care. “One thing unites these three finalists, and many more in Missouri agriculture, a shared goal of handing the reins to future generations with their farms in even better shape than when they began. These three finalists embody the values of Missouri farmers and ranchers who seek to enhance the long-term viability of their agricultural lands and businesses by following similar practices.”

“Society owes a great deal of gratitude to farmers who are producing the food we need while simultaneously improving soil health and other natural resources,” said J.R. Flores, NRCS State Conservationist. “These finalists show us firsthand that farmers who use practices such as rotational grazing, no-till and cover crops can be profitable today without sacrificing the natural resources that we will need tomorrow.”

“We all rely on the land and water, and the relationship with those resources is central for farmers,” said Robert Alpers, a mid-Missouri farmer and chairman of the Missouri Soybean Merchandising Council. “Bringing the Leopold Conservation Award into Missouri is an outstanding way to recognize those farmers who are leaders among their peers in innovation and in demonstrating their commitment to their land.”

The inaugural recipient of the Missouri Leopold Conservation Award® in 2017 was Uptown Farms of Laclede in Linn County.

For more information on the award, visit www.leopoldconservationaward.org.

MISSOURI FARMERS CARE
Missouri Farmers Care is a joint effort by Missouri’s agriculture community to stand together for the men and women who provide the food and jobs on which our communities depend. The coalition of over 45 leading Missouri agricultural groups promotes the growth of Missouri agriculture and rural communities through coordinated communication, education and advocacy. www.MOFarmersCare.com.