Home / In the News / Conservation and Diversity— Cope Grass Farms 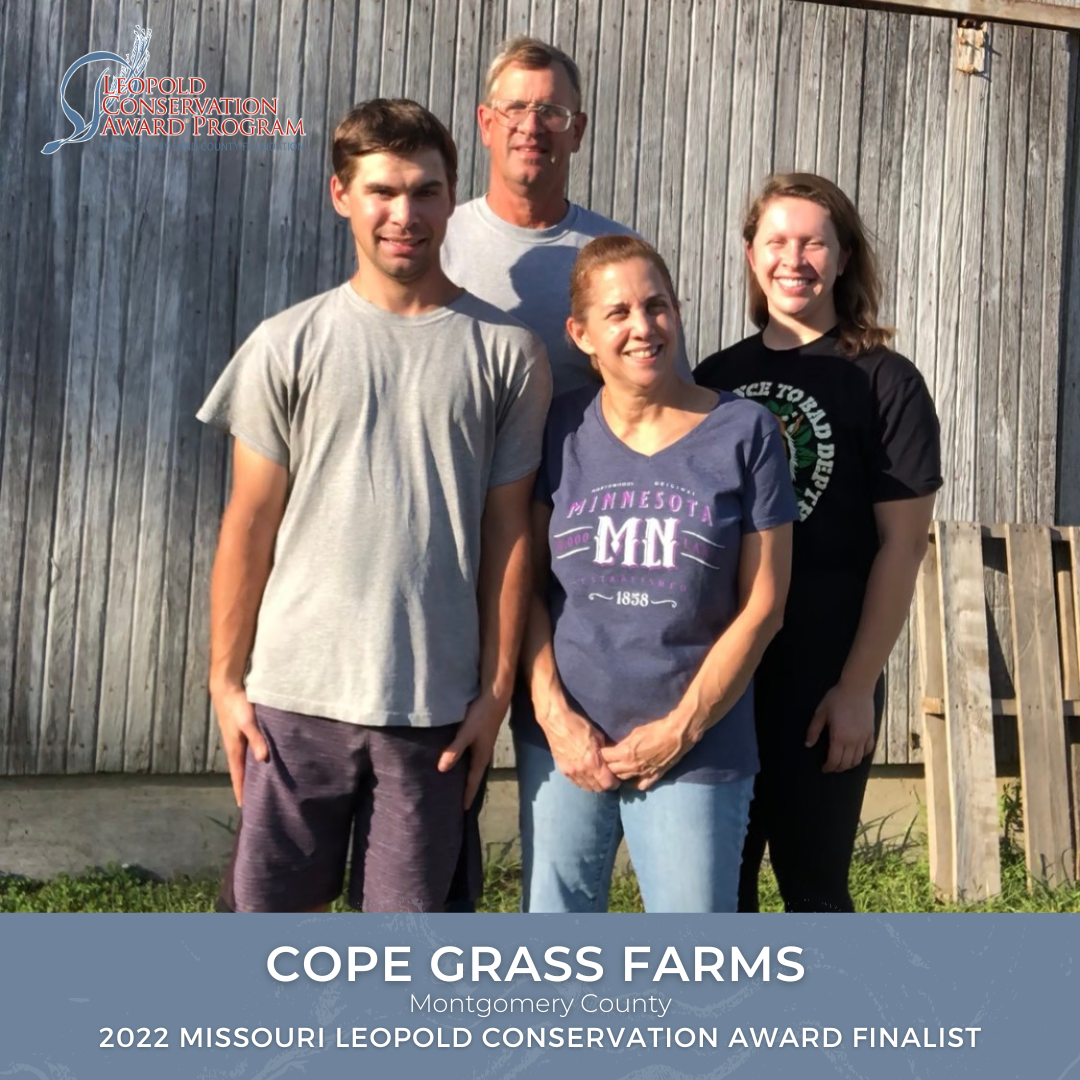 Harry and Rose Cope, along with their children Sabrina and Dustin, represent the fourth and fifth generations of their family to farm near Truxton in #AgriReady Montgomery County. The diversified livestock on the farm are raised on open pastures; the family raises grass-finished beef and lamb and keeps their own replacement females to raise the next generation. Hogs on pasture feast on their favorite treat: acorns. Ducks and turkeys are free ranging as well.

Harry intentionally began conservation efforts in 1985 by managing grazing on the farm. He uses forages to keep soil in place on highly erodible land, instead of using common structural practices, such as contour planting or terraces. He has been practicing no-till planting, cover crops and native plantings for more than a decade, long before the practices were commonly accepted in east central Missouri. Federal incentive and cost share programs such as the Environmental Quality Incentives Program and the Regional Conservation Partnership Program have made it possible for Cope Grass Farms to diversify their grasslands, and their timber has been improved by using the Conservation Stewardship Program. The Copes note that the results have been transformational. Forty-three different and diverse native species of grasses have been identified in the Copes’ pastures. As a result of improvements in timber stand health, the farm is home to a robust bat habitat, and they have increased acorn production, which their hogs really enjoy. More than seven acres have been specifically planted as a haven for pollinators, and during their latest Audubon audit, 67 species of birds were counted on Cope Grass Farms.

It isn’t just Harry’s willingness to welcome wildlife species or plant diversified seeds across his farm that make his conservation efforts so unique. His innovative and non-traditional stewardship methods play a part. In early summer when many farmers are rushing to “make hay while the sun shines,” Harry patiently waits until July 15 to work with 25 percent of his warm season pastures. This standing forage provides native birds ample habitat to nest in and, as a result, populations of those birds are flourishing on the farm. A grazer through and through, Harry is known for saying “graze it, don’t bale it.” He allows his livestock to graze standing milo and corn instead of harvesting those crops or baling additional forage. This innovation helps save on input costs and reduce carbon emissions – improving sustainability for their farm. Harry knows that his goal of having half of his pastures in diverse native grasses will make for healthy soil, healthy local ecosystems and help raise healthy livestock.

Conservation is helping make additional partnerships possible. Harry rents land from owners who support his management philosophy and land improvement efforts, and the owners appreciate Harry sharing the story of the land’s ecological community with them.

“We have gotten much better results over the years working with Mother Nature, rather than fighting her every step of the way,” said Sabrina Cope who serves as the farm’s marketing director.

Cope Grass Farms shares their experiences of both successes and failures while hosting and speaking at public field days, pasture walks, grazing schools, and workshops. Harry’s insight and experiences spark interest in other producers interested in managing for enhanced conservation and diversity.