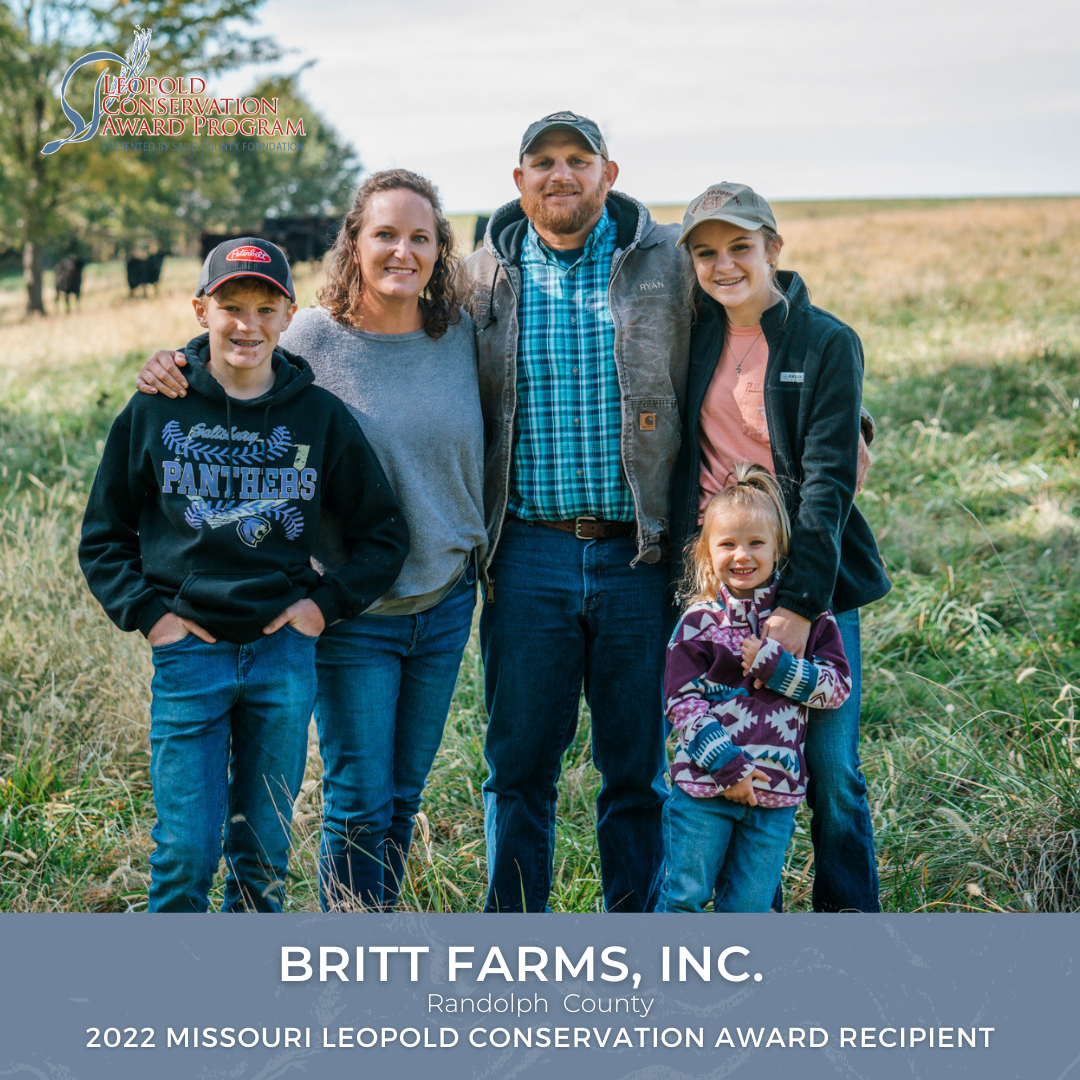 Britt Farms of Clifton Hill, Missouri, located in Randolph County, has been selected as the recipient of the 2022 Missouri Leopold Conservation Award®. This award, named after renowned conservationist Aldo Leopold, recognizes farmers, ranchers and foresters who inspire others with their dedication to land, water and wildlife habitat management on private land.

Ryan Britt and family were announced as the award recipient during the Missouri Association of Soil and Water Conservation Districts Annual Training Conference in Osage Beach on November 28. For their recognition, the Britts received a check for $10,000 and a crystal award.

“Britt Farms is a true success story of conservation implementation across multiple generations, and they are eager to adopt and share new conservation technologies,” said Scott Edwards, NRCS Missouri State Conservationist. “Ryan Britt’s commitment to conservation extends beyond his own farm with his willingness to promote voluntary conservation and environmental stewardship both at the local and national level with the Association of Soil and Water Conservation Districts.”

Britt Farms Inc. is a family farm consisting of approximately 5,000 acres of row crops, hay and beef cattle production. Ryan is a fifth-generation farmer who, with his father, brother-in-law, and the support of their families, produces corn, soybeans, wheat, hay and cattle through practices which incorporate the use of technology and innovative partnerships to maximize efficiency and sustainability.

Ryan’s fascination with technology’s role in agricultural conservation stems from watching his father make adjustments to their equipment that better evaluated their land. After coming home from the University of Missouri in 2000, Ryan was well-equipped with the knowledge of how technology can maximize efficiency while protecting water and soil. His first conservation adoptions included grid-based soil testing and variable rate fertilizer applications.

The Britts rapidly adopted conservation techniques. Britt Farms transitioned to a completely no-till system, incorporated crop rotations and cover crops to reduce soil erosion and improve soil health and added a rotational grazing system for their beef cattle which allowed for reduction of soil erosion and protected water quality in the nearby Thomas Hill Reservoir. The family built a covered feeding area with a deep pack barn designed for zero runoff to minimize nutrient loss and optimize cattle health, built terraces and grassed waterways, and created a wetland area for wildlife preservation.

“As the national sponsor for Sand County Foundation’s Leopold Conservation Award, American Farmland Trust celebrates the hard work and dedication of the Britt family,” said John Piotti, AFT President and Chief Executive Officer. “At AFT, we believe that conservation in agriculture requires a focus on the land, the practices and the people and this award recognizes the integral role of all three.”

Earlier this year, Missouri landowners were encouraged to apply, or be nominated, for the award. Applications were reviewed by an independent panel of agricultural and conservation leaders. Among the many outstanding Missouri farmers nominated for the award were finalists: Rick Aufdenberg of Jackson in Cape Girardeau County, Cope Grass Farms of Truxton in Lincoln County, and Stanton Farms of Centralia in Boone County.

“Leopold Conservation Award recipients are examples of how Aldo Leopold’s land ethic is alive and well today. Their dedication to conservation shows how individuals can improve the health of the land while producing food and fiber,” said Kevin McAleese, Sand County Foundation President and CEO.

In his influential 1949 book, A Sand County Almanac, Leopold called for an ethical relationship between people and the land they own and manage, which he called “an evolutionary possibility and an ecological necessity.” Sand County Foundation presents the Leopold Conservation Award to private landowners in 24 states with a variety of conservation, agricultural and forestry organizations. For more information on the award, visit www.leopoldconservationaward.org. 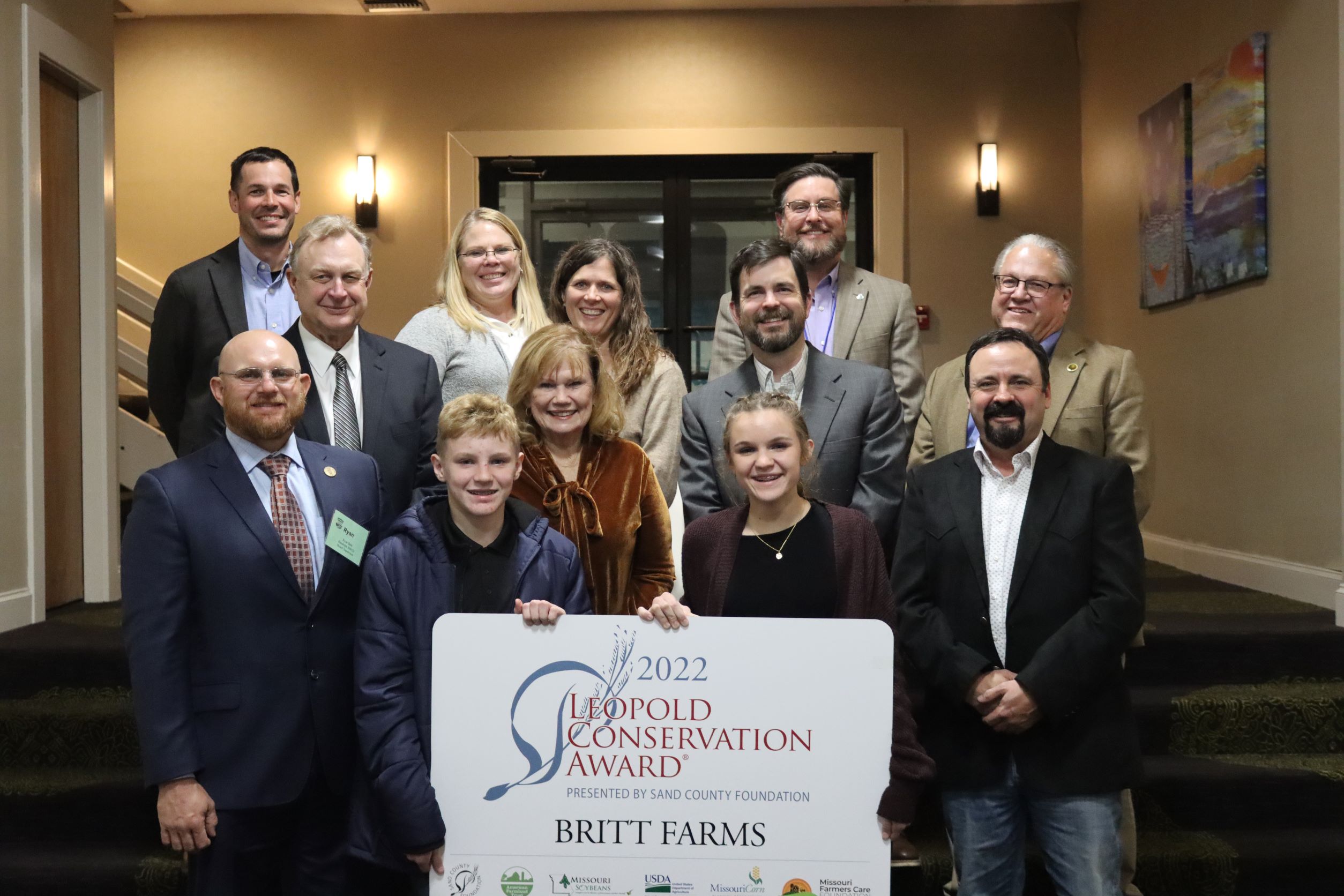 AMERICAN FARMLAND TRUST
American Farmland Trust is the only national organization that takes a holistic approach to agriculture, focusing on the land itself, the agricultural practices used on that land, and the farmers and ranchers who do the work. AFT launched the conservation agriculture movement and continues to raise public awareness through its No Farms, No Food message. Since its founding in 1980, AFT has helped permanently protect over 6.5 million acres of agricultural lands, advanced environmentally sound farming practices on millions of additional acres, and supported thousands of farm families. www.farmland.org

MISSOURI FARMERS CARE FOUNDATION
Missouri Farmers Care Foundation enables Missourians to understand the influence and importance of agriculture in their daily lives by serving as the centralized hub of the unified educational programs, awards, and hunger relief efforts of Missouri's agricultural community. www.MOFarmersCare.com